Almost daily technology blogs features stories about advances in the field of desktop 3D printing. New techniques and technologies, not to mention new 3D printers, are constantly being developed. But one of the most underrated advances in the consumer 3D printing market is the proliferation of 3D model repositories. Thingiverse, Youmagine, pinshape, GitHub, and Sketchfab are just a few of the dozens of different sites hosting 3D models for download.

These sites and many others are fantastic for downloading and printing models, as long as the models provided suit your needs. But what if you need to or want to edit the models? This seems like it should be easy; however, the major problem you will encounter is that the vast majority of 3D models online are provided in STL format. STL files can be downloaded and printed directly, but it can be difficult to edit these models in 3D CAD software like Fusion 360.

What is a “complex” STL file?

An STL file consists of a bunch of triangular surfaces joined together to create an object. The reason most 3D CAD programs cannot edit STL files the same way they edit models created directly in the software is because STL files have no internal structure. An STL file is simply a complex surface consisting of two-dimensional triangles.

This T-Rex skull by MakerBot (thing:308335) is a complex STL made from a large number of triangular surfaces.

Therefore, in order to convert an STL into a solid body, Fusion 360 must build a solid object based on every triangle in the STL. This process becomes more and more difficult as the number of triangles in the STL increases. For simple STL files, Fusion 360 can convert the STL to a solid body directly, without requiring any modifications to be made to the STL mesh first. So, for the purposes of this tutorial, a complex STL is one that Fusion 360 fails to convert using the Mesh to Brep tool, at least not without requiring modifications to the STL first.

For complex STL files, Fusion 360 will fail to convert the model using the Mesh to Brep tool without modifying the STL first. 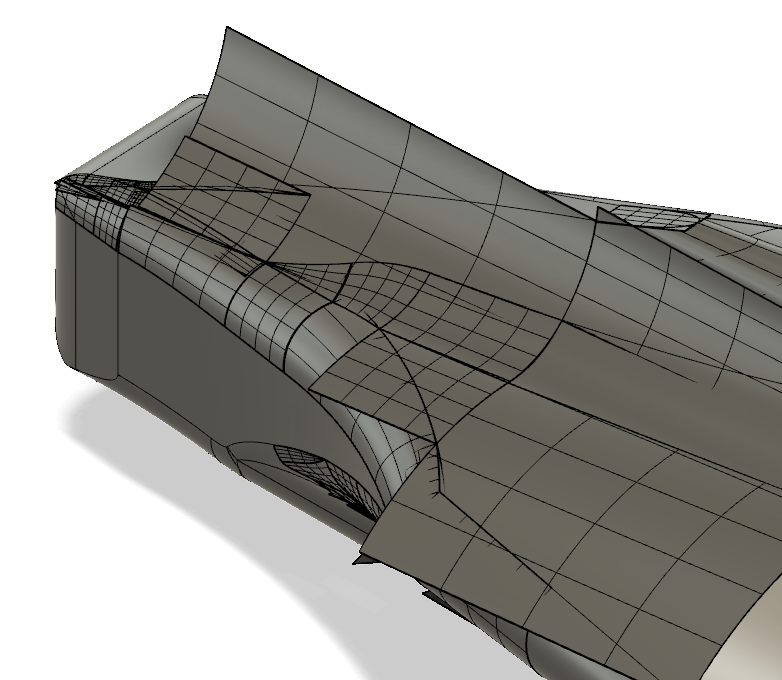 Convert a Complex STL into a Body

The procedure below will allow you to convert a complex STL into a body that can be edited in Fusion 360 using your normal editing tools in the Model workspace.

Import your STL into Fusion 360

First of all, the STL file will need to be imported into Fusion 360. If you’ve done this before, skip to the next step. Otherwise, in the upper-left corner of the Fusion 360 window, click the Upload button. Then, click the Select files button and navigate to the STL you wish to import.

After selecting the STL file you want to convert, click the Upload button, this time the one in the lower-right corner of the file upload window. Then, the STL file you selected will be imported into Fusion 360. The process can take a few minutes.

The problem we have with converting the complex STL to a solid body is the complexity of the STL mesh itself. Therefore, in order to allow the tools in Fusion 360 to convert the STL to a solid body, we need to reduce the complexity of the mesh. Fortunately, there is a newly released workspace in Fusion 360 that gives us access to tools for editing Meshes. In the upper-left corner of the screen, switch to the Mesh workspace.

The Mesh workspace allows a variety of actions to be performed on mesh bodies. The one we will use for this tutorial is the Reduce function. First select the entire STL mesh body, this is easiest to do by selecting the Mesh Body 1 in the Browser in the upper-left corner of the screen. Then, in the ribbon at the top of the screen, select Modify > Reduce.

Reduce the complexity of the Mesh using Insert > Reduce in the Mesh workspace.

Experiment with the density value until you find one that works for your model.

Input the desired density decimal value into the Reduce dialog box and click the OK button. You will end up with a mesh body that should look almost the same as the original but with fewer faces in the mesh.

On the left is the original Mesh body and on the right is the reduced version.

Normally Fusion 360 tracks all the edits you make to a model in a timeline at the bottom of the window. However, we actually cannot convert the STL file into a body while Fusion 360 is tracking history. Therefore, the history tracking functionality will need to be turned off.

First of all, switch back to the Model workspace using the dropdown in the upper-left corner of the screen. Then, at the top level of the Browser tree is the file name itself. If you right click on the file name, you will get a menu. To turn off history tracking, select Do not capture Design History.

When trying to turn off Device History, you may find that it is already disabled, in which case the option at the bottom of the menu will say “Capture Design History.” If this is the case, you will need to turn on history and then turn it off again. 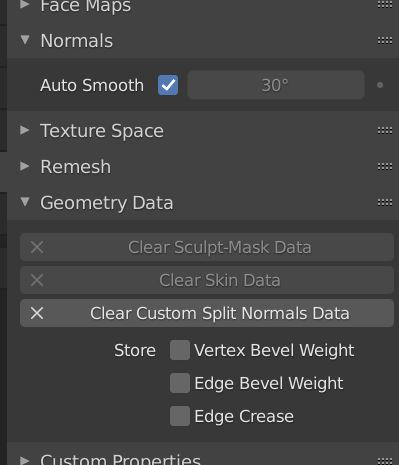 Now that the density of the STL mesh has been reduced enough to allow conversion to a body to be a feasible operation, we can do the actual conversion. Looking in the feature tree again, if you expand the Bodies section, you will find an item called MeshBody1. The mesh body is the STL file. To convert the STL file, right click on the mesh body and select Mesh to BRep. 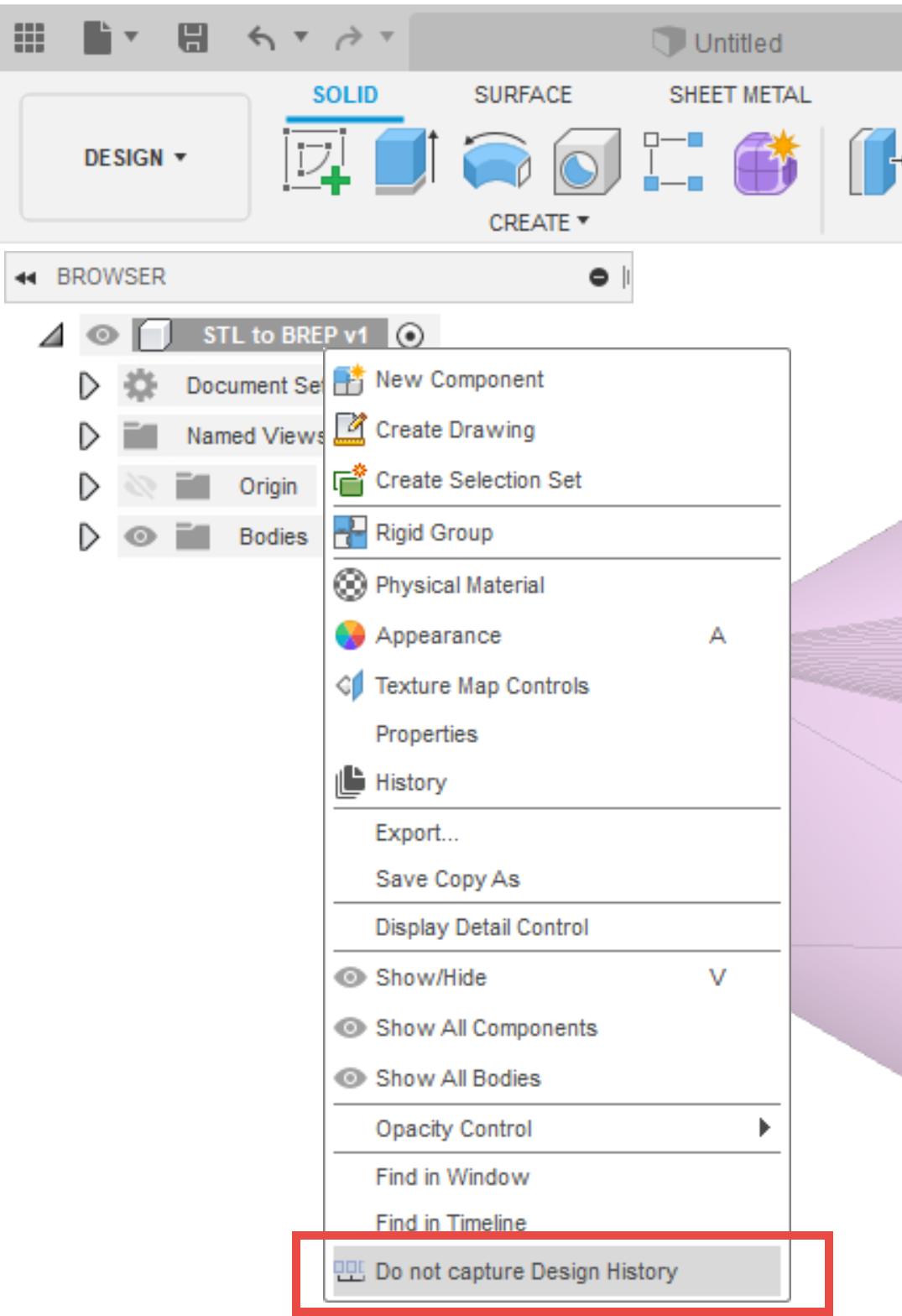 If the tool still fails to convert the STL to a body because of the number of faces, you will need to repeat the previous step to reduce the mesh density a bit more. You may also get a warning that Fusion 360 can convert the Mesh to a solid object, but the conversion is not recommended. If you get this error message, you can still convert the Mesh into a solid body, but the performance you will experience in Fusion 360 while editing the converted body may be a bit sluggish.

With the STL converted into a solid body, you can perform whatever modifications you would like to the body just like you would with any other model in Fusion 360. Therefore, you can get STL files off online repositories, and then modify them to suit your needs.

With the STL converted to a solid body, you can edit it in any way you want. For example, I made a unicorn T-Rex.

First, create a 'New Design' and load your mesh file: 'Insert -> Inset Mesh'. At this point, your mesh file is loaded into Fusion 360 but you can not modify it like it's done with sketches.

So now it is necessary to convert it into a BRep Model but this can only be done if you temporarily stop capturing the design history. A right-click onto the small Radiobox next to the project name (in this case: Unsaved) shows a menu.

Down on the bottom of the menu is an item called 'Do not capture Design History', click on it and the history will no longer be captured until you activate it again the same way like deactivating it. 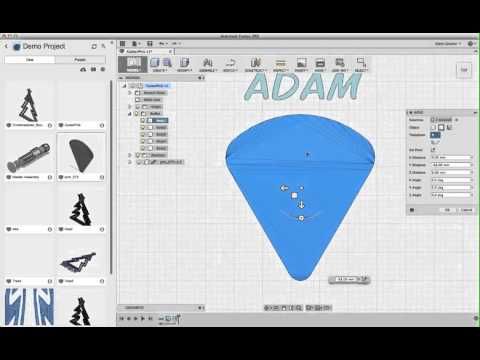 When the capturing of the history is stopped it is now possible to do a right-click onto the mesh model and choose the menu item 'Mesh to BRep'. Then Fusion 360 converts the mesh into a BRep model.

You will see a lot of unnecessary triangles on the planes of the new BRep Model. Just click on one triangle and after it is selected delete it. Now Fusion 360 will clean all other triangles on the same plane. You have to do this for all of your planes in the model to clean them up. For not so complex models this will be done in 5-15 minutes.

After you cleaned everything you can restart the capturing of the design history and now it is possible to modify the model like if it is created from sketches.