Cesium hydroxide is used as an electrolyte in alkaline storage batteries. Cesium iodide is used in fluoroscopy equipment—Fourier-transform infrared spectrometers—as the input phosphor of x-ray image intensifier tubes, and in scintillators. Cesium nitrate is used as a colorant and oxidizer in the pyrotechnic industry, in petroleum. Cesium is described by the German Institute for Strategic Metals as “the most electropositive of all stable elements in the periodic table”, and the heaviest of the stable metals. Cesium is used in many different applications. It has the atomic number of 55 and has an atomic mass of 133 moles/gram. Cesium is most commonly used in everyday life with atomic clocks.

Cesium is a member of the alkali family, which consists of elements in Group 1 (IA) of the periodic table. The periodic table is a chart that shows how chemical elements are related to each other. The alkalis include lithium, sodium, potassium, rubidium, and francium. Cesium is considered the most active metal. Although in theory francium is more active than cesium, francium is too rare to have any commercial uses.

Cesium was discovered in 1861 by German chemists Robert Bunsen (1811-99) and Gustav Kirchhoff (1824-87). They found the element using a method of analysis they had just invented: spectroscopy. Spectroscopy is the process of analyzing light produced when an element is heated. The light produced is different for every element. The spectrum (plural: spectra) of an element consists of a series of colored lines. 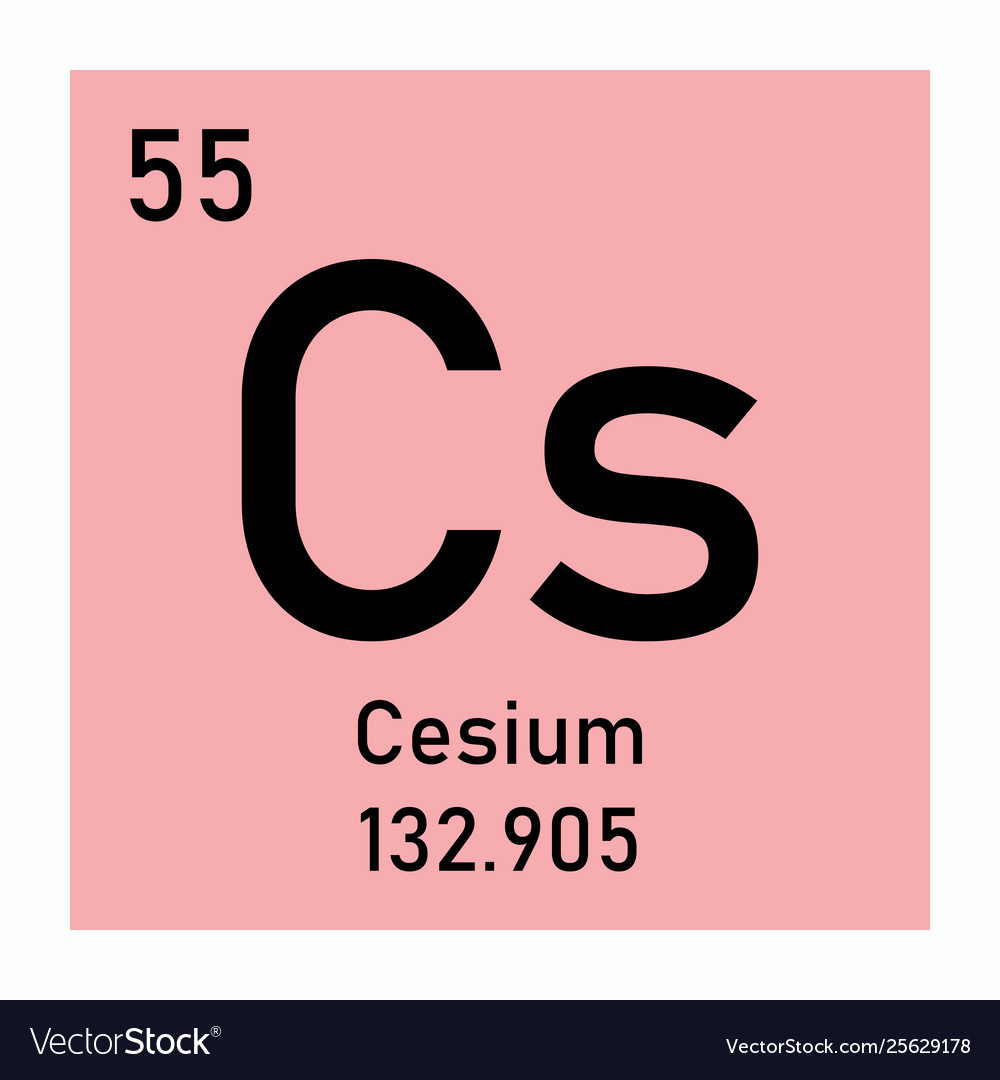 Cesium is not a common element, and it has few commercial uses. One of its radioactive isotopes, cesium-137, is widely used in a variety of medical and industrial applications.

The invention of spectroscopy gave chemists a powerful new tool. In many cases, the amount of an element present in a sample is too small to see. But the element is much easier to detect by spectroscopy. When the substance is heated, the hidden elements give off characteristic spectral lines. Using spectroscopy, a chemist can identify the elements by these distinctive lines.

Such was the case with the discovery of cesium. In 1859, Bunsen and Kirchhoff were studying a sample of mineral water taken from a spring. They saw spectral lines for sodium, potassium, lithium, calcium, and strontium. These elements were already well known.

After Bunsen and Kirchhoff removed all these elements from their sample, they were surprised to find two beautiful blue lines in the spectrum of the 'empty' spring water. The water contained an unknown element. Bunsen suggested calling the element cesium, from the Latin word caesius for 'sky blue.' For many years, the name was also spelled caesium.

Cesium is a silvery-white, shiny metal that is very soft and ductile. Ductile means capable of being drawn into thin wires. Its melting point is 28.5°C (83.3°F). It melts easily in the heat of one's hand, but should never be handled that way! Cesium's boiling point is 705°C (1,300°F), and its density is 1.90 grams per cubic centimeter.

Cesium is a very reactive metal. It combines quickly with oxygen in the air and reacts violently with water. In the reaction with water, hydrogen gas is released. Hydrogen gas ignites immediately as a result of the heat given off by the reaction. Cesium must be stored under kerosene or a mineral oil to protect it from reacting with oxygen and water vapor in the air.

The abundance of cesium in the Earth's crust has been estimated at about 1 to 3 parts per million. It ranks in the middle

of the chemical elements in terms of their abundance in the earth.

Cesium occurs in small quantities in a number of minerals. It is often found in an ore of lithium called lepidolite. The mineral containing the largest fraction of cesium is pollucite (Cs 4 Al 4 Si 9 O 26 ). This ore is mined in large quantities at Bernic Lake, in the Canadian province of Manitoba. Cesium is also found in small amounts in a mineral of boron called rhodizite.

Nuclear fission is used in nuclear power plants. The heat produced by nuclear fission can be converted into electricity. While this process is going on, cesium-137 is being produced as a by-product. That cesium-137 can be collected and used for a number of applications.

As an example, cesium-137 can be used to monitor the flow of oil in a pipeline. In many cases, more than one oil company may use the same pipeline. How does a receiving station know whose oil is coming through the pipeline? One way to solve that problem is to add a little cesium-137 when a new batch of oil is being sent. The cesium-137 gives off radiation. That radiation can be detected easily by holding a detector at the end of the pipeline. When the detector shows the presence of radiation, a new batch of oil has arrived.

This isotope of cesium can also be used to treat some kinds of cancer. One procedure is to fill a hollow steel needle with cesium-137. The needle can then be implanted into a person's body. The cesium-137 gives off radiation inside the body. That radiation kills cancer cells and may help cure the disease.

When a hollow steel needle filled with cesium-137 is implanted into a person's body, the isotopes's radiation can kill cancer cells.

Cesium-137 is often used in scientific research also. For example, cesium tends to stick to particles of sand and gravel. This fact can be used to measure the speed of erosion in an area. Cesium-137 is injected into the ground at some point. Some time later, a detector is used to see how far the isotope has moved. The distance moved tells a scientist how fast soil is being carried away. In other words, it tells how fast erosion is taking place.

Cesium-137 has also been approved for the irradiation of certain foods. The radiation given off by the isotope kills bacteria and other organisms that cause disease. Foods irradiated by this method last longer before beginning to spoil. Wheat, flour, and potatoes are some of the foods that can be preserved by cesium-137 irradiation.

Cesium can be obtained in pure form by two methods. In one, calcium metal is combined with fused (melted) cesium chloride:

In the other, an electric current passes through a molten (melted) cesium compound:

Cesium has a limited number of uses. One is as a getter in bulbs and evacuated tubes. The bulb must be as free from gases as possible to work properly. Small amounts of cesium react with any air left in the bulb. It converts the gas into a solid cesium compound. Cesium is called a getter because it gets gases out of the bulb.

Cesium is also used in photoelectric cells, devices for changing sunlight into electrical energy. When sunlight shines on cesium, it excites or energizes the electrons in cesium atoms. The excited electrons easily flow away, producing an electric current.

Cesium-137 is used in atomic clocks, the most precise method for measuring time.

A beam of energy is shined on a very pure sample of cesium-133. The atoms in the cesium are excited by the energy and give off radiation. That radiation vibrates back and forth, the way a violin string vibrates when plucked. Scientists measure the speed of that vibration. The second is officially defined as that speed of vibration multiplied by 9,192,635,770.

Cesium is used in atomic clocks, the most precise instrument of time-keeping.

Atomic clocks keep very good time. The best of them lose no more than one second in a million years.

Cesium is not regarded as essential to the health of plants or animals, nor does it present a hazard to them. 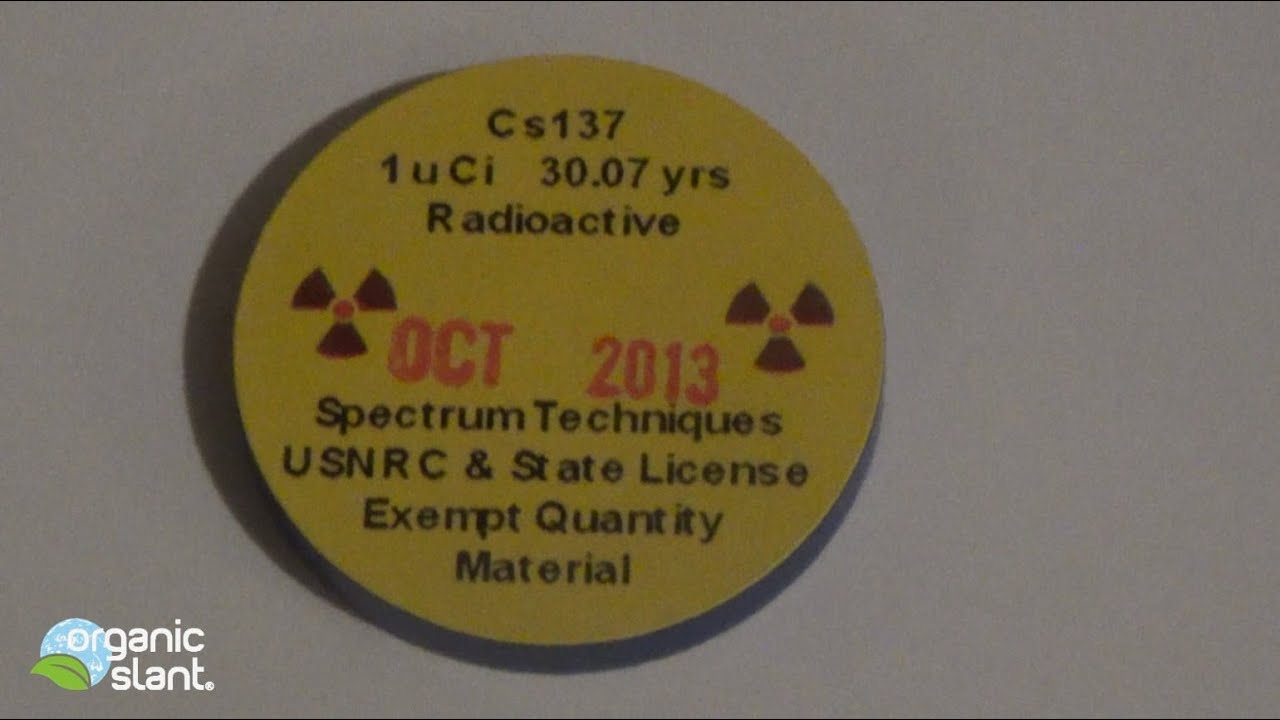