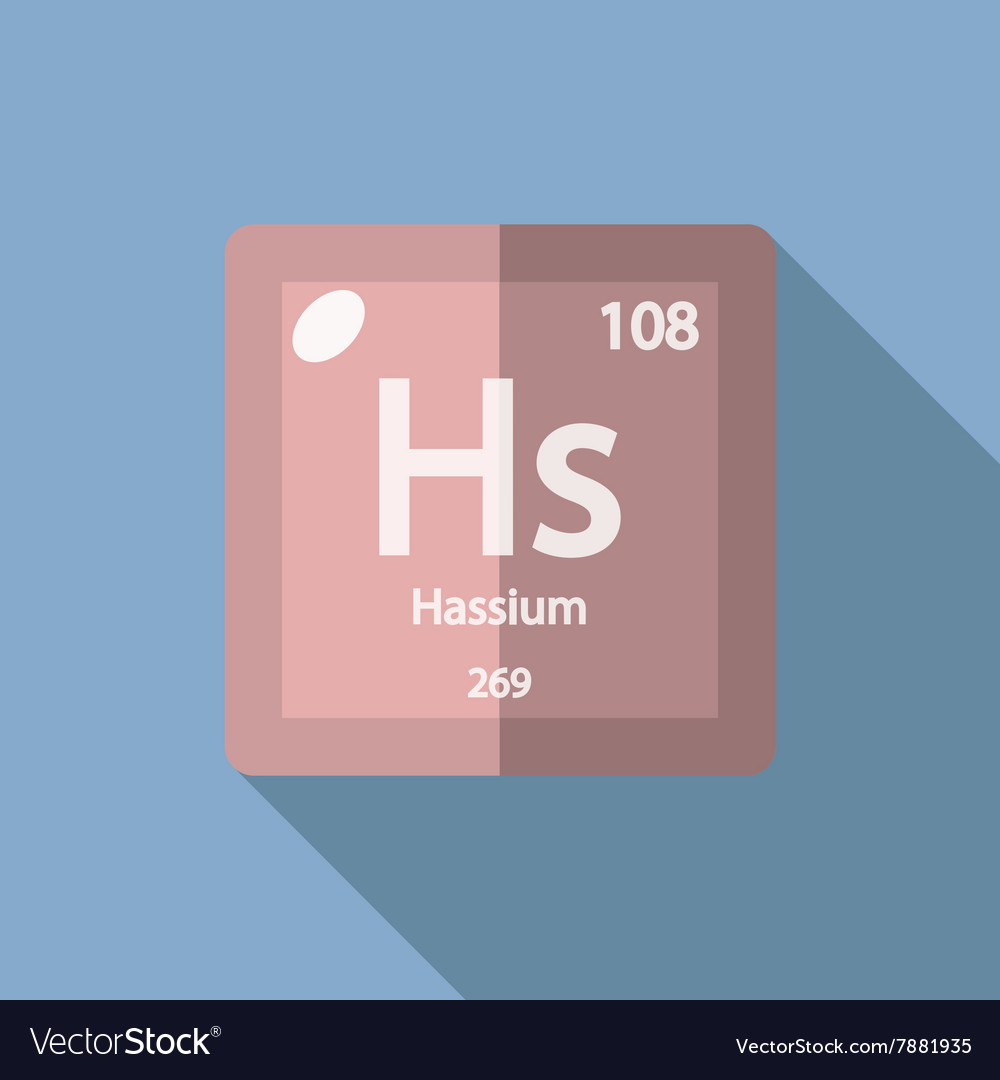 Hassium is a synthetic element that was discovered in 1978. It is a highly radioactive and unstable element.

Hassium is a chemical element.It has been named unniloctium and eka-osmium.It has the symbol Hs.It has the atomic number 108. It is a transuranium element. Hassium is a radioactive element that does not exist in nature. Hassium is a metal belongs to a group of elements called the transition metals. These metals make up the central block of the periodic table and have similar properties and characteristics, such as.

According to the Mendeleev’s nomenclature of undiscovered elements, hassium was named as eka-osmium or element-108. The efforts to create hassium started in 1978, when a team of scientists led by Yuri Oganessian at The Joint Institute for Nuclear Research (JINR), Dubna, Russia [1]. They did not achieve the desired results. Later in 1984, Peter Armbruster and Gottfried Münzenberg who worked at the Gesellschaft für Schwerionenforschung (GSI; Institute for Heavy Ion Research) Germany, bombarded a lead target with nuclei of iron and produced three atoms the 108 element, hassium-265. The element was named hassium after the Hassia, which is the Latin name for German state Hesse where GSI institute was located. The name was suggested by Peter Armbruster in 1992. The International Union of Pure and Applied Chemistry approved the name hassium in 1997. Its symbol is Ha.

Hassium is an artificial element and does not exist in nature. Around a hundred atoms of hassium have been synthesized till date [2].

Hassium is a silvery metal and predicted to be a solid under normal conditions. It is expected to have a density of around 40.7 g/cm3, which make it the heaviest of all known 118 known elements. The amount of hassium produced so far and the short half-life of hassium has made it difficult to carry out analysis of its physical and chemical characteristics.

The chemical characteristics of hassium are not well studied yet. It is predicted to chemically resemble osmium, ruthenium and iron. It is expected to readily react with oxygen and form a tetroxide that is highly volatile. Hassium has been placed in the 6d series of transition metal. It is a member of the group 8 and 7th period of the periodic table. The most stable oxidation state of hassium has been proposed to be +8.

Hassium is a radioactive element and requires special precautions with handling and storage.

There are twelve isotopes of hassium, that range in atomic masses from 263 to 277. They are unstable and unnatural. Most of the radioisotopes decay through the emission of alpha particles while some undergo spontaneous fission [3]. The most stable isotope is hassium-270 is which half-life of around tensecondsd.

[3]. Office of Science, Nations Work Together to Discover New Element,.

Hassium, atomic number 108, is a synthetic transactinide element. Though early experiments in the late 1970's by the Russian research team of Turi Oganessian and Vladimir Utyonkov at the Joint Institute for Nuclear Research, it is unclear from available data whether they were successful. The official discovery of Hassium has been credited to the German research team of Peter Armbruster and Gottfried Munzenberg at the Institute for Heavy Ion Research in 1984. The naming of hassium was a contentious one, and wasn’t resolved until 1997, when the IUPAC gave in to the discovering team's desire to name the element for the German state of Hessen, where the Institute for Heavy Ion Research (GSI) is located.

Though hassium's instability has precluded extensive study of its chemical properties, many of these can be predicted from its location on the periodic table. As a member of the group 8 elements, it is expected to have properties similar to those of the platinum group elements, especially its closest homologue osmium. Notably, hassium is predicted to have a density higher than any of the known elements, nearly double the density of osmium, which has the highest density that has been measured. Like many other unstable synthetic elements, hassium is studied extensively in basic science research settings, but lacks any practical applications.

Hassium is a D-Block, Group 8, Period 7 element. The number of electrons in each of hassium's shells is 2, 8, 18, 32, 32, 14, 2 and its electron configuration is [Rn] 5f146d6 7s2. In its elemental form, hassium's CAS number is 54037-57-9. Hassium's appearance is unknown but it is suspected to be silvery white or metallic grey in color. Hassium is a synthetic element that is not present in the environment. Little is known about the element and it has no known uses. Hassium was first created in 1984 by a team headed by Peter Armbruster and Gottfried Münzenber at the Heavy Ion Research Laboratory in Darmstadt, Germany. Its name is derrived from the Latin word 'Hassias' meaning 'Hess,' after the German state.

Hassium information, technical data, properties, and other useful facts are detailed below. Scientific facts, such as the atomic structure and ionization energy are included. 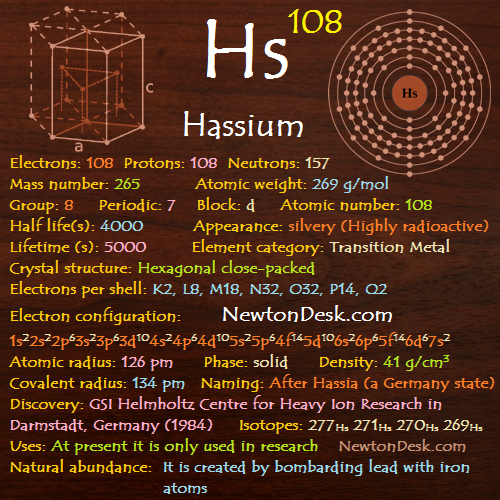