Avid Pro Tools Carbon™ is a new breed of audio interface. It’s a hybrid audio production system that features incredible sound quality and combines the power of your native CPU with onboard HDX DSP acceleration. So you can push your computer to the limit when you mix and record through AAX DSP plugins with near-zero latency monitoring. Pro Tools Carbon delivers exceptional sonic performance. Four state-of-the-art analog-to-digital converters per channel serve up pristine audio quality, with an impressive 126dB dynamic range that accurately captures quiet sources with minimal noise, and loud sources, without distortion. 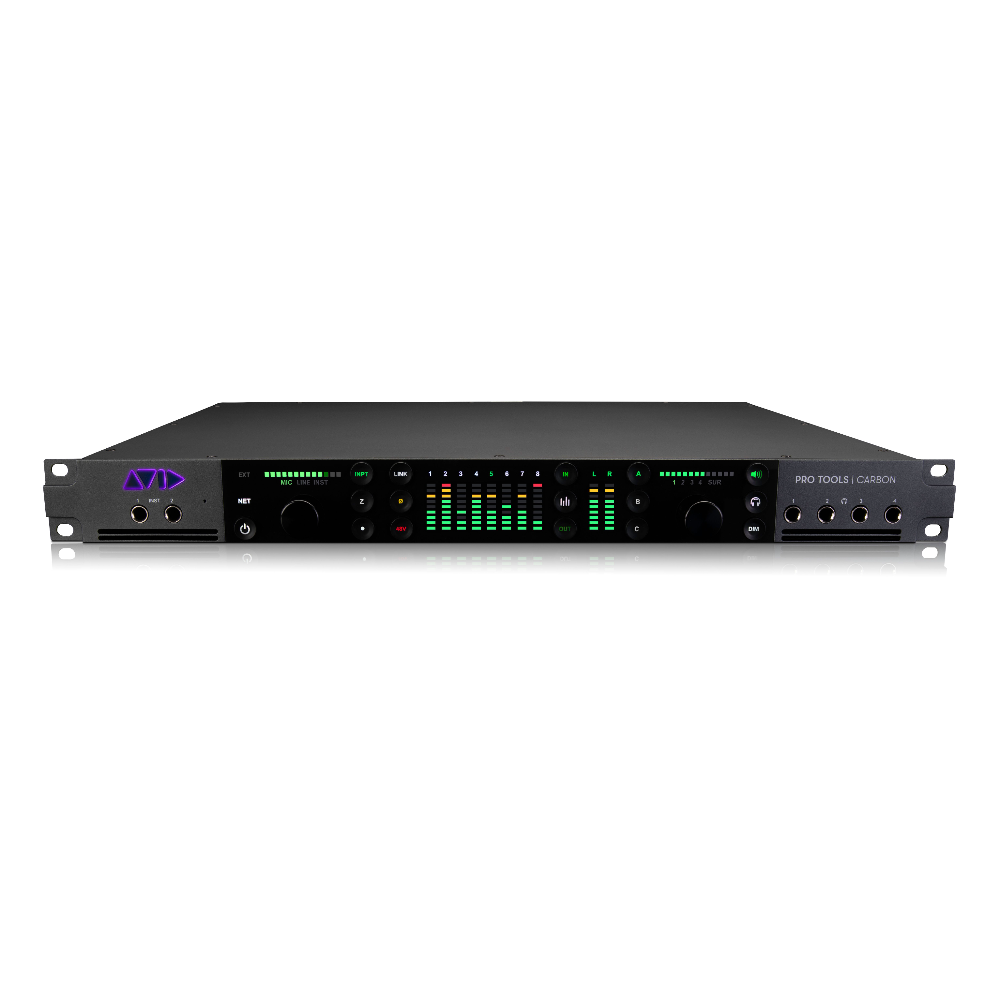 There was a time when Avid sat upon the summit of the consumer audio interface market with their beloved early gen Mbox, Mbox 2, and later the Mbox 3/Mbox Pro, before quietly retiring the beloved product line in 2015. The reasons for this were as numerous as they were complex.

As the manufacturers of the industry standard software in the professional space, Avid were at a unique vantage point for the rise (and continued rise) of home recording. Whereas some other DAWs were aimed at the consumer market from the get-go, Avid had to continually figure out ways to translate the incredible leaps they were making in the post-production and professional space and make them fit the smaller footprint (and considerably lower CPU capacity) of consumer level hardware and home recording applications.

While ProTools 9 will mostly be remembered for finally emancipating the native software from it’s proprietary hardware, it was also the exact moment where Avid really started to bridge the gap between their Pro and Consumer offerings, bringing many of the powerful features from their acclaimed HD software over to the standard version of PT. Features, such as automatic plug-in delay compensation, OMF/AAF file import, Timecode ruler, and multi-track Beat Detective were now readily available to the everyperson, a decision which in many ways fast tracked the maturation of home recording/mixing in the DAW era.

With the software now liberated from its hardware and with home recordings continued ascendence into the mainstream, the period after has been something of a free-for-all, with a host of third party interfaces entering the fold and wAvid largely pulling back from the interface market altogether, instead focusing their attention on redefining tactile functionality in the DAW space (in the form of their Artist Mix Series) and providing large-scale solutions for the Post-Production market.

And of course, as always, there is ProTools – quietly percolating in the background, consistently coming through with revolutionary new feature sets and sophisticated workflow improvements with every update. Features that have the ability to make your life infinitely easier, provided you are far enough along your recording journey to truly understand their worth.

Which brings us to ProTools Carbon, the newest incarnation of the ProTools line and a significant release for Avid for a number of reasons.

For one, it sees the brand jump back into the world of interfaces feet first, with a stellar offering that instantly catapults them right back into the mix with the UA’s and RME’s of the world.

Also – and perhaps more importantly – it signifies Avid coming full circle and using everything they have picked up in the Pro space and the standalone software market to create a ‘hybrid’ system: one that has the ability to be all things to all people, as well as introducing a host of groundbreaking features and unbridled processing power into an attainable package for the budding engineer.

Within every significant product release there are usually a few key areas of focus areas that underpin a particular product and its intent, and it’s clear from the outset that Avid have officially declared war on recording latency (especially the kind that seems to rear its head with plugins enabled), making it of primary concern for ProTools Carbon.

Thanks to some clever use of hybrid architecture, Carbon is capable of achieving less-than-1ms latency which is in itself a massive breakthrough, but it’s the way it is able to do this that is sure to have tongues wagging (and set the wheels in spin for a whole new subcategory of audio interfaces moving forward).

By craftily offloading the demanding tasks to the DSP processors within the interface itself, while augmenting responsibility between your computer and interface for less CPU taxing applications, in turn translating to some of the most natural and pleasant performance based monitoring out there – all without the need for delay compensation or time stretching after the fact.

This is particularly handy when tracking drums or vocals, or any task requiring microphones to be placed in the open air without the aid of a dedicated control room or second engineer.

From a performance standpoint, I found the Carbon to provide an incredibly intuitive and enjoyable monitoring experience, while keeping annoying distractions like monitoring flam or click offset to an absolute minimum.

To be perfectly honest, it was borderline scary just how much of a tangible improvement the Carbon’s low latency properties had on my own playing and timekeeping abilities.

The ability to have latency down to a near unnoticeable level, not only meant better accuracy at the playing position, but it legitimately made me question why I hadn’t thought about a low latency interface earlier?After all, what is time if it’s hitting the mic, headphones and hard drive completely independently of one another? What is time anyway? Who even am I?

Philosophical crises aside, the ability to monitor faithfully in a near latency free environment is a very big deal and as a feature, is something that the Carbon does better than practically any other interface out there at the moment.

Wps office online. Another handy bonus of the Carbon’s unique setup is the ability to track with plugins engaged, without adding anything in the way of latency, giving you the added bonus of being able to place mics relative to how they interact with your effects (rather than placing these mics dry, and saving the processing for after the fact.) 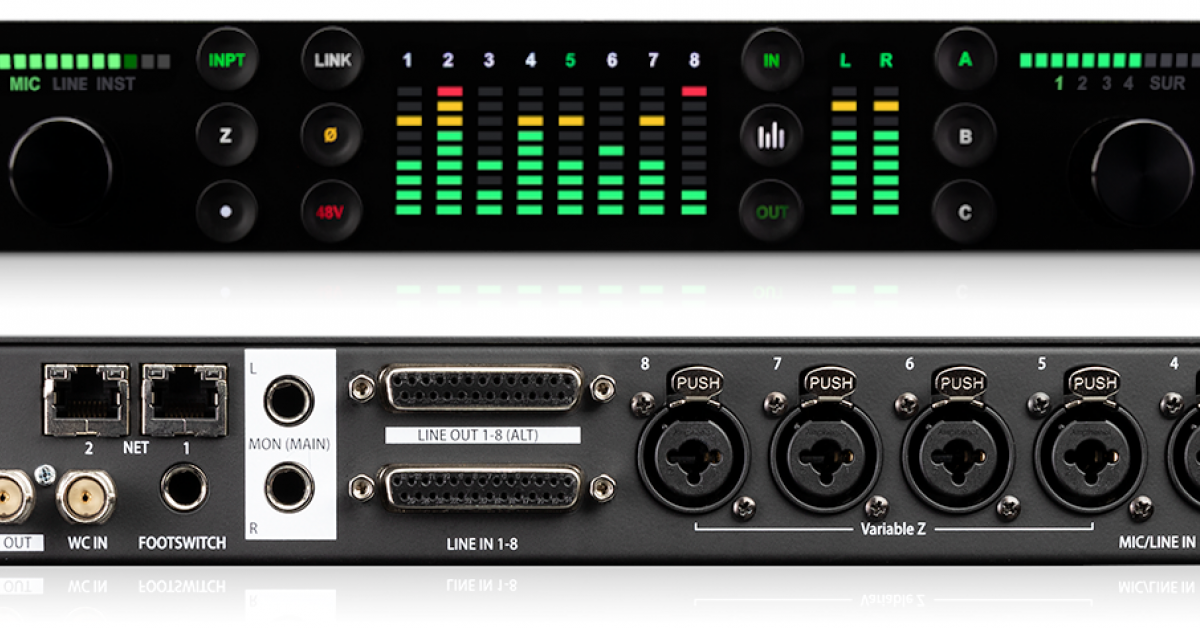 I found this reversal of workflow to be of particular use for auditioning potential mix ideas at the tracking stage, which in turn went a long way towards helping refine the complex relationship between mic placement, frequency response and effect processor. I feel like my recordings on the Carbon were better as a result of this.

Boasting eight HDX DSP processors, the Carbon is part-way to being as powerful as a dedicated HDX Core card – but replacing the extensive HDX systems that you find in big budget studios is not the raison d’être of the Carbon, rather it’s feel more like a holistic approach to bringing this kind of processing power (and the kind of performances it can yield) into the context of the home studio. Avid’s Carbon has well and truly cleared the hurdle of latency, allowing the relationship between performance and its commitment to the eternal to be symbiotic, instead of confusing and disheartening.

In no mood to cut corners, Avid has decked the Carbon out with top of the line hardware. The 1U rack design of the interface is another nod to the increasing sophistication of the home studio market and the eight preamps on hand are of excellent quality. The A/D conversion is stellar, bearing the same level of excellence we have come to expect from Avid’s premium product lines. 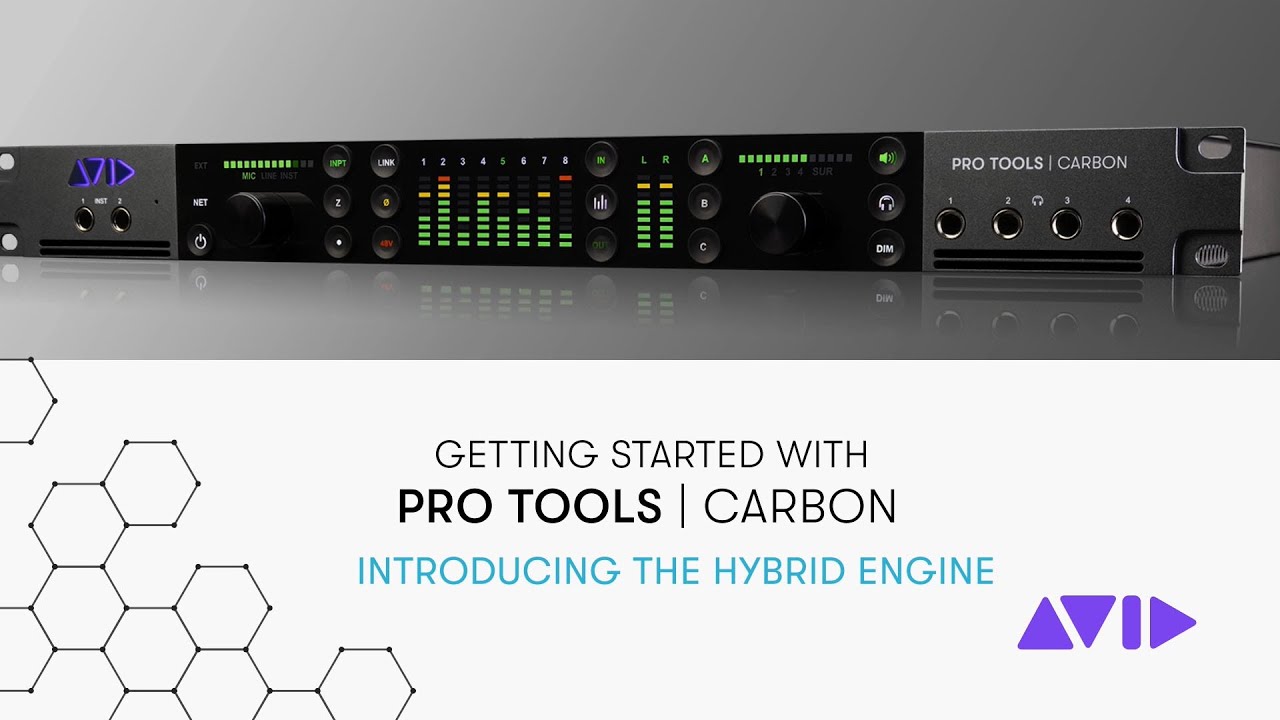 Of particular note is the quality of the direct inputs on the front of the interface. This is generally an area where many similarly priced interfaces fall short, but not the Carbon. With their switchable impedence and high quality circuitry, they are some of the best I’ve encountered on a stock interface, really bringing synths and DI’d bass to life.

Another obvious and notable aspect of the Carbon is the presence of four headphone jacks. This might sound minor in essence, but to anyone who has ever struggled with having enough headphones to go round (or even worse, have had to use a crappy dongle type device) this is sure to bring a sigh of relief. Couple this with the carbons additional I/O options like ADAT and optical outputs and it definitely adds to this feeling of heightened scalability usually exclusively reserved for the world of high end studio.

All in all, ProTools Carbon is a triumphant return to the interface market for one of the true titans in the space. By focusing their attention on what they do best – refined workflow, high octane processing and seamless DAW integration – Avid have all but completely closed the gap between Pro and Prosumer with the Carbon, a product that is just as likely to find favour in the home as it is in the Professional studio.

Its use of hybrid processing and combination outboard/native DSP to eradicate many of the latency and performance issues that generally plague small scale recording is impressive to say the least and is sure to find ProTools Carbon many fans from both ends of town.

For more details on Australian availability, get in touch with Innovative Music.